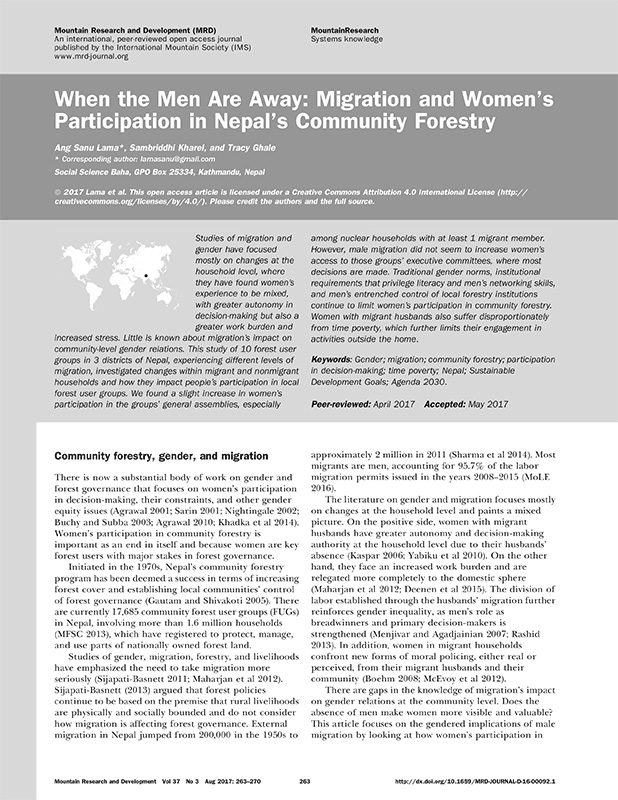 When the Men Are Away: Migration and Women’s Participation in Nepal’s Community Forestry

Studies of migration and gender have focused mostly on changes at the household level, where they have found women’s experience to be mixed, with greater autonomy in decision-making but also a greater work burden and increased stress. Little is known about migration’s impact on community-level gender relations. This study of 10 forest user groups in 3 districts of Nepal, experiencing different levels of migration, investigated changes within migrant and nonmigrant households and how they impact people’s participation in local forest user groups. We found a slight increase in women’s participation in the groups’ general assemblies, especially among nuclear households with at least 1 migrant member. However, male migration did not seem to increase women’s access to those groups’ executive committees, where most decisions are made. Traditional gender norms, institutional requirements that privilege literacy and men’s networking skills, and men’s entrenched control of local forestry institutions continue to limit women’s participation in community forestry. Women with migrant husbands also suffer disproportionately from time poverty, which further limits their engagement in activities outside the home.

Rapid assessment of the impact of COVID-19 on private recruitment agencies in Nepal
Nepali Migration to Japan and Korea: Converging Ends, Diverging Paths, and Contrasting Effects

Keynote Address by Ahmed Mushfiq Mobarak on 'Migration and the Labour Market Impacts of COVID-19'
;